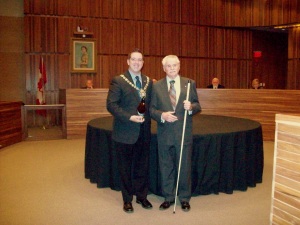 Here are my notes that I read last night at our council meeting to recognize MR. Sanders.

In the words of his nominators, as the Committee Chair, Jim was “masterful in listening to all perspectives and issues and helping the committee achieve its objectives.” The Committee is made up of individuals with disabilities as well as representatives from industry and service providers.

The nominators added, “Jim is truly committed to achieving a fully accessible Ontario by 2025.”

In addition to Chairing the committee, Jim is an active volunteer, accepting invitations across Ontario to speak about the AODA and disability issues in general.

He retired in 2009 after a 42-year career with the CNIB. He worked in four provinces, serving for his final eight years as President and CEO of CNIB National. For many years, Jim represented CNIB as Vice President of the North American/ Caribbean Region and member of the International Executive Committee, The World Blind Union.

Jim was appointed to the Order of Canada in 2003.

It is truly an honour for me to have this opportunity to congratulate such an outstanding citizen of Guelph.

Congratulations Jim, on receiving such a prestigious award!