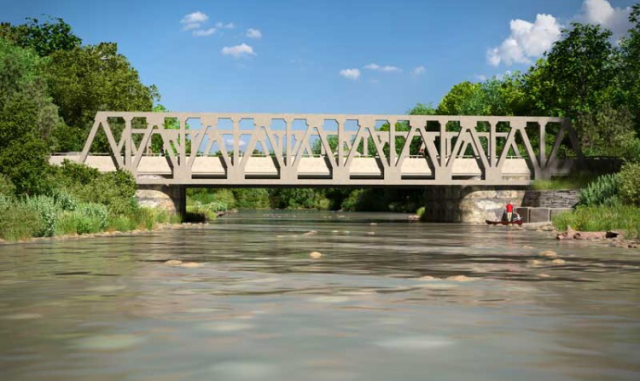 Niska Road bridge will remain open and become a two lane bridge. Thank you to everyone involved through this multi year process.

The above picture is an artist rendering of what a proposed replacement  bridge might look like. However, last night a new motion was brought forward so that public engagement will take place during the detailed design process for further options. Perhaps as myself and Ward 6 councillor Mark MacKinnon proposed:

Guelph, Ont., December 4– At a 6-hour meeting that began Thursday and concluded shortly after midnight on Friday, City Council approved the staff recommendation to complete the Schedule ‘C’ Municipal Class Environmental Assessment (EA) process and proceed with the reconstruction of Niska Road from Downey Road to the City limits on the west side of the Bailey bridge over the Speed River, and the construction of a two-lane bridge over the Speed River.
Council did not however approve the signalization of the intersection at Niska Road and Downy Road.
Council further directed staff to develop a public consultation process for use during the detailed design of the bridge that includes elements to address truck traffic and vehicle speeds.
Council also approved exploring the designation of the area as a cultural heritage landscape, and the preservation of the current bridge’s superstructure with the aim to repurpose and relocate it.
The estimated cost to implement the recommended improvements to the road and bridge is approximately $4.8 million. A total of $2,950,000 is included in the 2016 Capital Budget and Forecast. This budget was presented to Council on October 28, and will be deliberated on December 9. The remaining estimated funds will be requested in future budgets.
The EA was initiated in 2013 to evaluate needed improvements to the road and bridge to meet current standards, and to address the deterioration and increasing maintenance costs of the bridge. The bridge underwent repairs in late April to keep it in service while the City continued the environmental assessment for a permanent solution.
For more information about the Niska Road EA and recommended improvements to the bridge and road, visit guelph.ca/niskaroad.