What’s Been Happening With a New @DowntownGuelph Library? #Guelph @GuelphLibrary 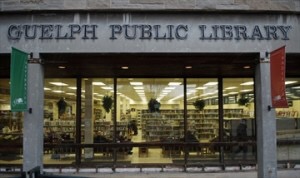 A few weeks ago the Guelph Mercury welcomed a brand new community editorial contributor to the fold.

For his first, (perhaps last now) column he choose to try and describe how over the last 13 months as mayor I have lacked leadership on one particular issue – making the construction of a new downtown library a priority.
Very quickly, the community chose sides.
Many commented that the city doesn’t need a new downtown library. That we should renovate the existing one. Or, that the existing one is working just fine – “don’t put a dime into it” some told me. Even more indicated that their local branch serves their needs just fine and they would rather not have any of their hard earned money spent on a new library downtown at all.

The other side argued that the current one is out of date, too small and has limited parking. It should be a center to help the homeless and people find jobs. That certain sections need expansion and that there are repairs that need to be addressed.
No matter what side was chosen, both sides commented to me that the staff at all 6 of our branches across the city (and the traveling bookmobile) were superb.
On social media some city councillors jumped in too. Some stated that the opinion piece “couldn’t have said (what was written) any better”. Others proclaimed “Let’s get a new Library back on the agenda and back in the budget.” A few others liked the article on social media too.
But let’s go back to the opinion piece and address a few things:
A new downtown central library has the potential to be a $25-$35-$45 million dollar (or more) capital project to which we currently have no idea of its permanent location, its updated needs, no concrete idea of potential increases to its operating costs and we currently don’t have the $25-$35-$45 million dollars. In my opinion, lobbing more of taxpayers money at “unknowns” at this present time isn’t the right thing to do. We must plan properly, just like you would in your own home or business.
It’s also a good opportunity to update him, and probably a few others in the community, on what has been done regarding the downtown library by myself and this council over the past 13 months.
– Baker Street update: An amended motion (requested by me, yet brought forward by Councillor Downer on my behalf) passed by council directing city staff to work with the library board on the existing Baker Street development potential or other downtown opportunities for a new library location.

– Up to $200,000 approved by council during the 2016 budget for the library board to establish an updated assessment of its location and needs.

– Two formal discussions with new MP Lloyd Longfield about potential infrastructure funding from the federal government for our city.

– A corporate risk assessment of the current downtown library facility with this report forthcoming to council this year.

– Discussions with the private sector on further development opportunities where I consistently bring up the library.

In addition to the above actions taken, his column failed to acknowledge the decisions of previous councils and library boards to move our library services away from a centralized (downtown) service model to an established satellite branch model in every Ward of our city which significantly increased accessibility for the vast majority of our residents.
Perhaps this is one of the reasons why Guelph’s library system is one of the highest trafficked library services in the province.

A 2014 Municipal BMA Study found that Guelph annually funds it’s local library services to the tune of $70 per capita. This places Guelph No. 1 in the province amongst municipalities with over 100K residents and over 60% higher than the provincial average of $42 per capita. This even tops the City of Toronto.
These excellent statistics in no way mean we look the other way on making a current situation even better, with potential better opportunities!
I hope the above details outline clearly that this term of council has not ignored the downtown library issue. I continue to be an advocate for well planned, accurate, properly located and financially feasible capital projects and the library is on that list.
Instead of throwing insults or uninformed comments towards myself or city hall on this issue, I encourage people to walk with us on the downtown library issue. I want an atmosphere where consensus can be built that builds our community up in a positive way that benefits all.

7 Comments on “What’s Been Happening With a New @DowntownGuelph Library? #Guelph @GuelphLibrary ”