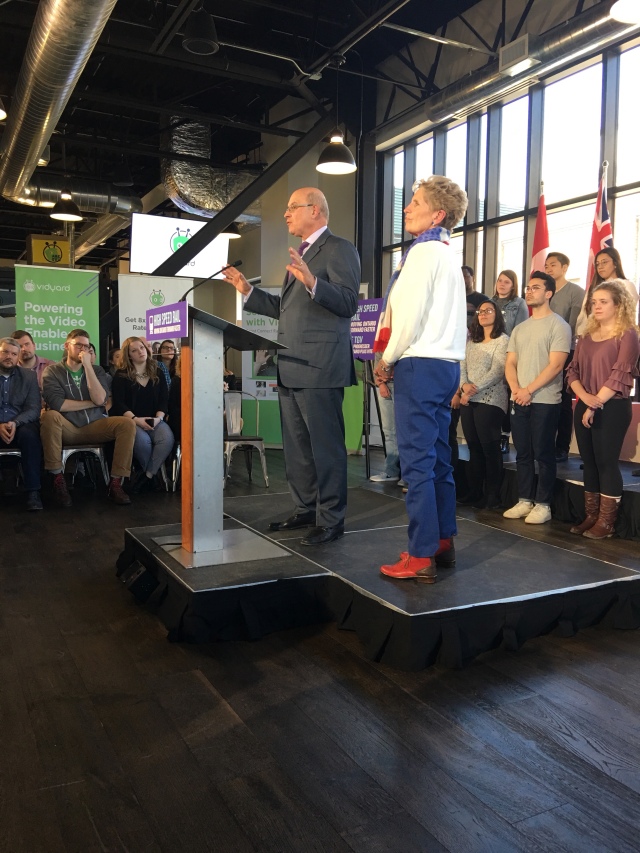 Today I joined other Mayors and residents of Kitchener, Waterloo and Guelph in Kitchener to welcome further announcements on High Speed Rail and All Day Two Way Go Trains!

Premier Kathleen Wynne was at Vidyard in Kitchener today to announce a series of actions Ontario is taking to dramatically expand regional transit for people in Waterloo Region.

As announced in the 2018 Budget, the government will make an initial investment of more than $11 billion to support construction of Phase One of Canada’s first high speed rail line. This will create a fast route between Toronto’s Union Station, Pearson International Airport, Guelph, Kitchener and London as early as 2025. Electric-powered trains moving at up to 250 kilometres per hour will slash travel times to an estimated 48 minutes between Kitchener and Toronto Union Station.

The Premier also announced key advances in bringing two-way, all-day GO train service to Kitchener by 2024, as part of the GO Regional Express Rail project (GO RER). Ontario is moving ahead with two environmental assessments (EAs), which are required to provide faster, electrified, two-way, all-day train service on the Kitchener line. One EA is to provide electrified service between Georgetown and Kitchener, and the other EA is the next step for the freight bypass to provide unrestricted rail access for passenger trains between Toronto and Kitchener. To help guide this work and deliver a near-term increase in service and faster travel times for customers, the province is hiring a technical advisor.

As part of this EA phase, Ontario is now working with the Greater Toronto Airport Authority (GTAA) to explore options to connect two-way, all-day service on the Kitchener GO line to the proposed multimodal transit hub at Toronto Pearson International Airport. The major transit hub the GTAA is proposing to build at Pearson will offer seamless connections between trains, buses, airplanes, light rail vehicles and high speed rail along the Toronto-Windsor corridor.

High speed rail and two-way, all-day GO RER will strengthen transit connections across Central and Southwestern Ontario and help create jobs and economic growth. The new and expanded services will give people a faster and greener way to get to a good job, and will help businesses attract talented workers from across a wider area.

Expanding transit options in Waterloo Region and across Southwestern Ontario is part of the government’s plan to support care, create opportunity and make life more affordable during this period of rapid economic change. The plan includes free prescription drugs for everyone under 25, and 65 or over, through the biggest expansion of medicare in a generation, free tuition for hundreds of thousands of students, a higher minimum wage and better working conditions, and easier access to affordable child care.

• Construction on the Highway 401 Rail Tunnel Project required to increase service on the Kitchener line begins in spring 2018, and plans to build a fourth track to deliver two-way, all-day electrified service from Union Station to Bramalea are already in progress.

• Track improvements to support two-way, all-day between Georgetown and Kitchener will begin as early as next year.

• The technical advisor on GO’s Kitchener line will work on improving the speed and frequency of service in the near term, starting the environmental assessments required for electrification of the line, and studying options to connect GO service to the proposed Pearson multimodal transit hub.

• Working with the GTAA to connect the Kitchener line to the proposed Pearson hub would create a solely passenger service corridor allowing for two-way, all-day electrified service from Union Station for both GO RER and high speed rail.

• GO RER is the largest rail project in Canada. It will quadruple the number of weekly trips across the GO rail network, from about 1,500 to nearly 6,000 by 2024.

• Since 2013, GO train service to Kitchener has doubled, and in 2014 the province purchased 52 kilometres of track between Georgetown and Kitchener for $76 million, clearing a major hurdle towards delivering two-way, all-day service.

• What high speed rail means to you and your community

“Waterloo Region’s booming economy has created a lot of good jobs — but it has also increased traffic and made getting around the region harder. We are building Canada’s first high speed rail line and bringing two-way, all-day GO service to Kitchener so you can get to work more easily and home to your family sooner. The people of Ontario are poised to do great things, but government needs to invest in that potential. That is what we are doing.”

“We are connecting communities and creating more transportation choices for people across Southwestern Ontario. This is a significant milestone in our commitment to deliver two-way, all-day GO train service to Kitchener by 2024, and to bring even more opportunity to the Innovation Supercorridor with high speed rail between Toronto and Windsor.”

“We are committed to providing two-way, all-day GO Train service to Kitchener-Waterloo and are moving ahead with the necessary environmental approvals, working with the Greater Toronto Airport Authority and exploring all available options that will allow us to deliver faster, more frequent service for our customers.”