Facts About #Guelph’s Parkland and Our Dedication Bylaw. Again.

In response to a number of inquiries from members of Council, here is a quick snapshot of responses to questions about Parkland inventory. 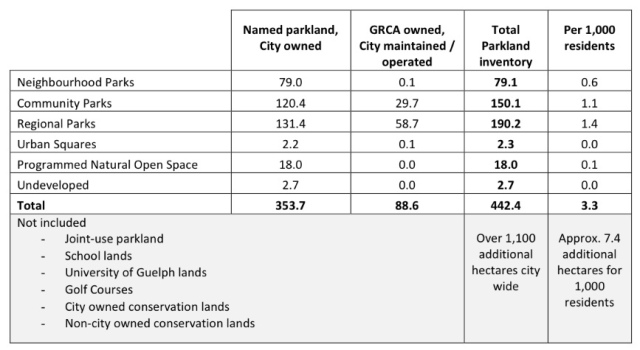 Is there a city-wide shortfall in parkland?

No, there is not a City-wide shortfall in parkland. Our overall target of 3.3 hectares of total parkland per 1,000 residents is being met. However, we are slightly shy on our targets for neighbourhood and community level parks, and so this will be a focus for Parks Planning staff as we bring future neighbourhoods and parks online.

What does the Official Plan say about parkland?

Regional Parks – 1.3 hectares per thousand people (encouraged rather than required)

Is Parkland Dedication the only way the City can acquire new parkland?

Why does the 10 year capital budget not show any new purchase of lands for parks?

Like Loading...
← Check Out This WONDERFUL @MakeAWishSWO & @WestJet Video with #Guelph Citizens!
Official Statement from #LUMCO to the Government of Ontario: →

2 Comments on “Facts About #Guelph’s Parkland and Our Dedication Bylaw. Again.”